Juni Fisher is an amazing western – folk singer and songwriter. She has a story to tell in more ways than one. She has lived her message as an accomplished horse woman. So her songs are not only the stories of western characters and rodeo heroes – but the voice of her heart and soul. 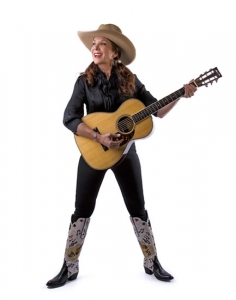 Born in the San Joaquin Valley – Strathmore, California – Fisher grew up in a farming family – peaches, oranges, row crops of cotton and milo. Her Mom, Ophelia Fisher, still runs the farm – still grows oranges. It was her Dad, Howard Fisher that started her love for music. He played 78’s – Sons of the Pioneers, Marty Robbins, and Eddie Arnold. Juni loved the music and was fascinated with the story that was inside the songs. It was magic to her.

Juni loved music. It came so natural to her that at a very young age she could play the music but she could not read it. Her Mom and Dad sacrificed to come up with the $2.00 a week for piano lessons. The organ player at church was her teacher and because Juni would not play the sheet music exactly the way this ”mean ole’ teacher” wanted her to – she called Juni’s Mom to tell her she was wasting her money – Juni had no talent. Juni was undaunted – she knew she could play the piano and she could knock out any of her favorites on her plastic harmonica. What did that woman know – Juni had talent!!

Juni had an uncle that stepped in and said that she should be taught guitar. Juni was introduced to Mr. Gohlston; a luthier (guitar maker). Mr. Gohlston said he knew a kind lady that would teach her piano and guitar. Juni’s first guitar was her Dad’s guitar that was too big for her – she could not even get her hands around the neck of that guitar. But at age 7, Juni began playing the guitar – any guitar – until she got her first Martin 518 – perfect for a little girl. She already loved playing her western favorites and then Joan Biaz hit the charts. The combination of western ballads and folk songs became her passion.

Let me include a few words from Juni’s biography on her website www.JuniFisher.net.

In her early adult years she apprenticed with a cowhorse trainer, and trained cowhorses from snaffle bitters to bridle horses, winning her first Snaffle Bit Futurity (IARCHA) in ’81, her first Bridle 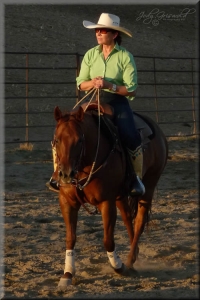 Horse Championship in ’83 (the Monterey Classic) while working on a cow calf operation, and running a roping arena. Her bridle horses did day work on the ranch, and competed weekends. If there was a campfire gathering with music, Juni was there with her guitar, singing the songs of the west she’d learned from her father. In 1984 she moved to Santa Ynez, CA, to work for a cutting horse trainer, taking her blossoming songwriting skills with her.

A local band was quick to ask her to play rhythm guitar and sing leads and backups, and soon she was working L.A. area clubs with a country dance band, which was playing western and cowboy music. Juni’s ability to ride at speed across the hills found her working as a foxhunting professional, and she accepted a one year position with a hunt club in Tennessee. Point to point racing, steeplechasing, and horse trials took the place of cowhorses, while she honed her songwriting skills among Nashville’s finest. 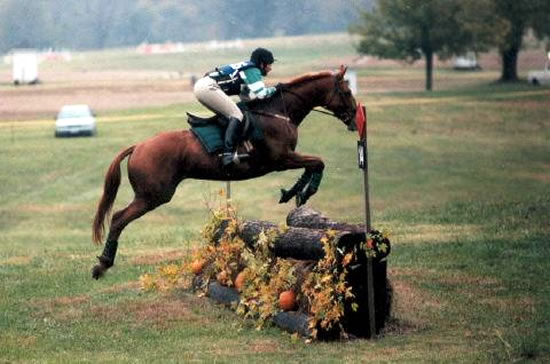 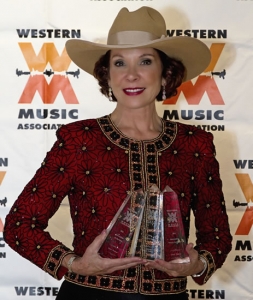 So Juni played the clubs – hit Nashville – stood in the song writers lines for the chance to play one song – sang back-up – whatever it took to keep pursuing her dream. Then one night it hit her. She needed to stop playing everyone else’s songs and create her own style. Back in the 60’s, Boomer Castleman had been singing with Michael Martin Murphy as a duo – The Lewis and Clark Expedition. Michael Martin Murphy went on to be on the only western label – Warner Western. Juni also knew Doug Green from Riders in the Sky – why she sat by him in church every Sunday!! So Juni had friends – she had written the songs – she had the music – why not produce her own album.

Her first Western release was “Tumbleweed Letters” (1999). In late 2003 Gary Brown, director of the Monterey Cowboy Poetry and Music Festival was looking for something “edgy”. Gary listened to Juni’s music and loved – loved – loved it!! He shared Juni’s music with other promoters and soon Juni would shift to music full time as her profession. She was on her way!!

Well, that’s the story of an amazing songwriter – singer!! Not if – but when you listen to her music you too will be moved by the magic – the magic of the story – the magic of her music. I recently had the privilege of listening to Juni at the Camp Street Café. In one of her sets she began to talk about how God has gifted each of us. Yes. Juni is the gift – her music – her story – her heart. Thank you Juni Fisher for sharing your gifts. My favorite album is “Let Er Go – Let Er Buck – Let Er Fly”