We had to be ready to board the bus at 5 AM because Dr. Jim wanted us to see the Fulton Fish Market in action.  Fulton Fish Market is America’s oldest fish market.  In November 2005, it moved from South Street in Manhattan to a brand new city (built and owned) facility in the Hunts Point section of the Bronx.  Fish are flown or trucked in on a daily basis from all over the US and the world.  The buyers (including famous chefs) arrive from midnight until early morning to make their purchases.  Annual sales exceed one billion in sales. 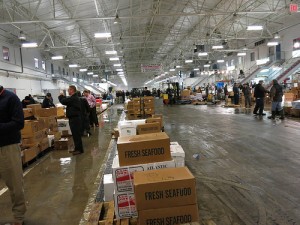 Next Benjamin Mosner (Vice President of Sales and third generation) gave us a tour of Mosner Family Brands – a meat packing operation in Hunts Point.  Mosner Brands is a family owned and run business that started out with David Mosner purchasing meat from wholesalers and delivering it to butcher shops.  Lamb was added and the company became a leader in the industry of humanly raised veal.  They continue to add new products – even wild game. 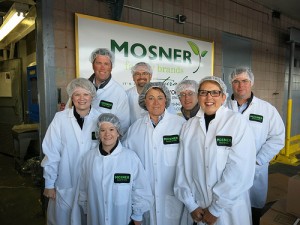 Myra Gordon is the Executive Admin Director for Hunts’ Point Produce Market.  She gave us a tour of the largest wholesale produce market in the world.  This facility covers 113 acres and employees over 10,000 people.  The produce is delivered fresh daily via plane, boat, rail, and trucks from 49 states and 55 countries.   They serve the smallest to the largest stores bodegas, – upscale restaurants – caterers – steam and airline –everyone.  This market generates 2.2 to 2.4 billion in sales annually.

The facility operates as a real estate cooperative – sanitation – maintenance – own public safety – EMT on location in case of injury.  Board meeting once a month – owners can attend – discuss rules and regulations.  Industry specific board – the city owns the land and it costs 4.5 million to lease from the city.

The country of origin labels gives them the ability to trace back to country – which field – which tracking plant – which truck it travelled on – to grower – even to seed if necessary.    If something is short in the US – there is always some place to get it.  The reason they look to other countries for produce is when they can’t find it in the US.   We are spoiled and want every thing all the time.  She mentioned a 2 week lag in strawberries – but talked about sourcing them somewhere else so there is never a shortage.  They also work hard to develop “local” – any product that can be delivered in one day.  They know “what’s riding” – air, ship, train, truck – every day.  More complicated process for imports – inspections before it leaves – inspection here – not right – goes back.  USDA on sight. 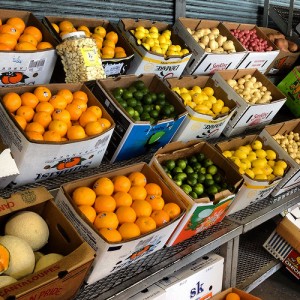 Product is ordered daily – the talk is about size – color – quality.   The coop has nothing to do with the owners business – it is a distribution center.  New York Economic Development decides who gets to come into the building.  Not much buying and selling of their space – generational.

Myra’s dad had retail stores and she grew up accustomed to having the best of everything.  She was at a BTS meeting – one woman wanted to know if they wanted to start a food coop.  She stepped up to run the coop.  In 1986 – she was asked to interview to run this facility. She did and got the job.

They considered a new addition – 340 million – city wanted to split which would cost the owners 120 million – at this point they could not do it.

The cost of transportation can cost more than the produce itself.  Shortage of trucks during peak months.  Labor is paid $17 an hour – double time on holidays – pension – welfare – overtime.

They really reached out during Hurricane Sandy – gave food to people.  They believe it is their responsibility to take care of others and give back to the community.  At the end of each day, remaining food is donated to community organizations – the Food Bank and City Harvest.  The coop gives an enormous amount of food away as well as the individual owners give to assist those in need.

Business is flat – no gain – but no loss currently.  Economic down turn has hurt their business.  With those that have lost their job – can’t buy as much – or maybe buying differently.  One thing is for sure – this market will not only survive but always thrive.  They are obviously incredible business people – but more importantly they are people with heart who believe it is an honor to serve. 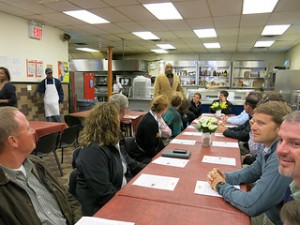 With Myra leaving us with words about serving – we then went to the Community Kitchen – a soup kitchen, food pantry, and food training program in West Harlem.  The facility is run by the most amazing man – Daryl Foriest.  I asked him about his background and this was his story.  He told me that he was Director of Food Services for The Plaza and The Four Seasons.  He was at the top of his game – making big money – expensive Manhattan apartment – BMW – all the accoutrements of a highly successful businessman.  Then he received a phone call from his brother who asked him what he was really doing with his life – making money for other people – not serving man or God.  The brother challenged him to reevaluate his life – that there were people who needed him – that he would be receiving a phone call from a man about community service.  The brother died the next day and Daryl was left with his brother’s heartfelt message.  When he received the phone call – he not only decided to talk – he decided to move – to leave his well-paying job and take the position of Director of Meal Services for the Community Kitchen.  For Daryl – a Christian man – it is a calling that he enters into with love and compassion for everyone he comes in contact with.  He says: “you don’t have bad days when you are helping people.”  Every day is a challenge – but every day is an opportunity to express love. He has created a place – not just for a meal – but for community – a place to belong and feel loved – a place for education – makeovers so young women can feel pretty – the right clothes for an interview.  He has helped people set up bank accounts – they save and the center matches.  There is no race game – no one is turned away that needs a plate of food.  During Hurricane Sandy – people who never needed their services were there for a meal.  They sent a van to pick up people – feed people.  It was dangerous, but Daryl knew that God would watch over them – that their work was not done.

The kitchen prepares and serves over 10,000 meals a month – to working adults, children, homeless, seniors (the forgotten people) and people with disabilities.  But they provide so much more.  They don’t just feed the body – they feed the mind – they provide a safe social environment.  They work with the people to insure their health and wellness – believing that when you are well, you are in control.  They have programs for education, but also to get the people together not only to participate – but to feel wanted – to create dignity.

They have also created Harlem Seeds to teach children how to grow their own foods – how to love the land – to learn every step from seed to the table.  The children have classes to learn how to prepare and cook the food they raised.  The older people get involved and cook with the children.  Everyone wins.

We were welcomed by the people – what they had they were willing to share.  We were served a lunch that was equivalent to any meal at the Four Seasons.  Our body was fed – but more importantly – our soul was nourished.  God’s presence can be felt at the Community Kitchen.

Talk about from one extreme to the next – from our moving experience at the Harlem soup kitchen to the intensity of the Financial District – Wall Street.  Now we would hear from speakers involved in the financial aspects of agriculture – from ag credit to commodity trading. 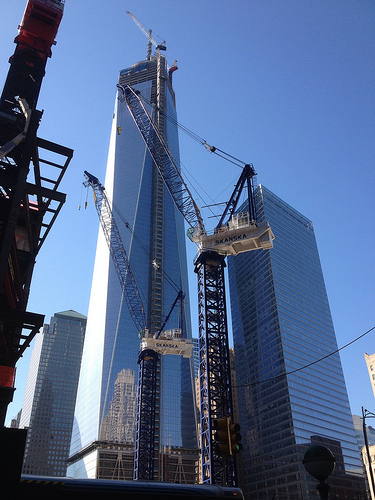 The Farm Credit System was created by an Act of Congress in 1916 -part of GSE.  The specific mission – to provide sound dependable funding for American agriculture and rural America.  It is a coop owned by its borrowers (farmers, ranchers, agricultural cooperatives and rural customers) 247 billion in assets.  One of the district banks is in Austin, Texas.  Most of the ag loans are collateralized by land.  The loans are made for production (seed money) – agribusiness loans – communication, energy,  water .  Loan eligibility based on credit, collateral and repayment capacity/cash flow.  Credit risk of certain loans is reduced by off-farm income sources and crop insurance.  Ag is a volatile business but net income remains strong.  Low interest rates has been a positive.  Capital stands at 15.7% for the System.  Our industry is cyclical and subject to many risks.  Loan portfolio includes – grains – cattle – dairy to name a few.  They seek a diversified portfolio within all types of agriculture.  Also diversification of geographical area keeps them strong – all 50 states.  Risks:  credit – political (Farm Bill) – operational – regulatory – reputation – interest rate – the market.  Some of these risks can be managed – some cannot.

They issue bonds to cover their loans – issued by the 4 System banks on a joint and several basis.  They are AAA rated.  Interest is generally exempt from state, local and municipal income taxes.  A broad range of investors want these bonds.  They want flexibility with banks – timing, maturity, amount, structure, lowest possible cost. The investors want liquidity – regular issuance and transparency – incremental (highest) yield possible.  So there is a selling group that helps sell the bonds – Merrill Lynce, J.P Morgan, etc.  29 different selling groups.  A message goes out through Bloomberg.  “we want to auction these bonds”.  Come back with your interest rate- deadline.  Trader receives a concession (fee) for selling the bond.

The market does not respond well to unknowns – sequestration, debt ceiling, and overall indebtedness –Washington politics.  European situation worse than US.  People are unhappy – job uncertainty, low pay, no increases.  1.9% GDP and 7.6% unemployment not factors conducive to optimism.

He said he is a commodities guy – particularly in areas of trading and liquidity.  Traded for Cargill in the 80’s – access to Russia – bought gas & oil.  Russian ships were not allowed into our ports so they just took 3 to 4 days – hired a lawyer – changed the flag on the tanker to a country that was allowed – ship got in.

Everything is timing.  You want commodities in your portfolio.  Held over a period of time – reduces volatility.

Mr. Gilbertie developed the liquidity and the standard contract in the ethanol market.  But he says the government is not currently regulating the amount of ethanol added to gasoline. 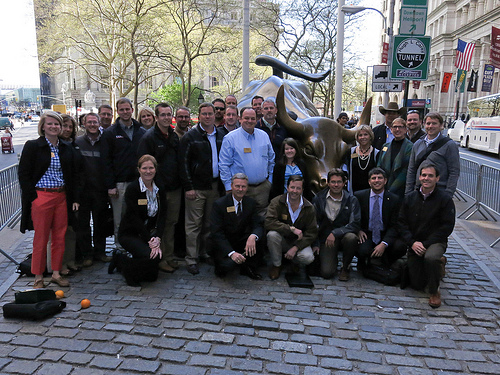