Don’t you just love that title? The truth is – this is the name of an exhibit that is currently at the Texas Capitol Visitors Center in Austin, Texas. “Texas Cattle Queens” tells the story of some of the trail-blazing Texas women involved in the cattle business. Much of the historical documentation comes from a book – “Texas Women on the Cattle Trails” by Sara R. Massey.

“Popular culture is rife with images in movies and television of men battling odds, nature, Native Americans, laws and other codes of the Wild West, and one another while moving cattle to market. These women- the Texas Cattle Queens – refute the patronizing roles that their era prescribed.

The history of Texas has long focused on the “cowboy” or “cattle baron”. These Cattle Queens – these women had an impact on the cattle drives and the cattle industry. They participated – they were not spectators. Some joined the cattle trails by choice – others out of necessity. During the nineteenth century, a number of Texas women defied gender roles by participating in the cattle business. These Cattle Queens participated in round-ups, ran the business affairs of the ranch and even rode up the cattle trails. These women successfully took on duties that society considered “men’s work” and they accomplished these tasks while wearing a skirt and riding sidesaddle. 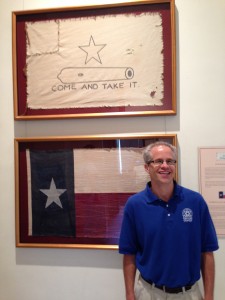 Cattle Queens took an active role in running ranches for a variety of reasons.  Margaret Borland and Amanda Burks did so out of necessity after their husbands died.  Molly Goodnight assisted her husband in making business decisions.   Lizzie Johnson was involved in the cattle business prior to her marriage and experienced much more success than her husband. Now – I could try to rewrite what I saw at the exhibit –  but I met Kyle Schlafer – Program Supervisor at the Texas Capitol Visitors Center and he not only gave me a personal tour – but he has given me his words about the exhibit.  So I say – why try to change greatness?  From here on – I am going to let you see the exhibit thru Kyle’s words. 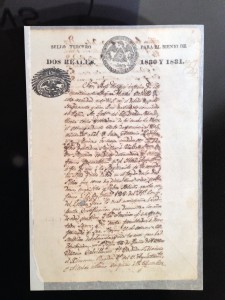 Ranching in Texas began under the Spanish Empire.  Spanish law permitted women more property rights than most nations at the time resulting in some trailblazing Tejana Cattle Queens.  Doña Rosa Hinojosa de Ballí inherited 55,000 acres of land in the Rio Grande Valley in 1790.  Rosa kept cattle, horses, sheep and goats and had eventually expanded her ranch to over one million acres.

American settlers moving to Texas took up ranching.  By the 1840s, a surplus of cattle existed in Texas and cattle drives proved the most cost effective way to transport cattle for sale.  Cattle drives from Texas to various points in the Midwest were common by the mid-1850s.  The Civil War disrupted trading routes as well as changed the operation of ranches.  Many Texas women had to step up and take care of the business while their husbands were away fighting.

Doña Maria del Carmen Calvillo inherited Rancho de las Cabras from her father in 1814.  She managed the ranch through Mexico’s Revolution against Spain, the Texas Revolution and Texas’ annexation to the United States.  Maria kept good relations with her Indian neighbors by providing them with cattle from her herd of about 2,000.

Cattle had largely gone unbranded during the Civil War and approximately five million Texas longhorns roamed on the open range.  These wild cattle were free for the taking to any rancher willing to round them up.  With so many cattle, prices were low in Texas.  However, a rancher willing to drive their cattle north found a much higher profit.   In 1873, Cattle Queen Margaret Borland learned that cattle were selling for $23.80 per head in Kansas compared to $8 per head in San Antonio.  Like many Texas ranchers, Margaret took her herd northward. 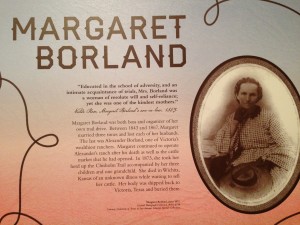 Margaret Borland was both boss and organizer of her own trail drive.  Between 1843 and 1867, Margaret married three times and lost each of her husbands.  The last was Alexander Borland, one of Victoria’s wealthiest ranchers.   Margaret continued to operate Alexander’s ranch after his death as well as the cattle market that he had opened.  In 1873, she took her herd up the Chisholm Trail accompanied by her three children and one grandchild.   She died in Wichita, Kansas of an unknown illness while waiting to sell her cattle.  Her body was shipped back to Victoria, Texas and buried there.

“At the time the trip was a very hazardous one…an adventure that tested the courage and endurance of sturdy men, and was considered entirely too dangerous to be undertaken by a woman” -Mary Taylor Bunton, 1939 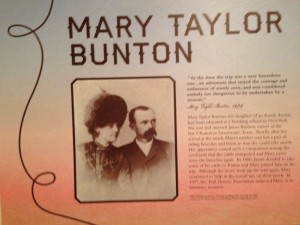 Mary Taylor Bunton, the daughter of an Austin doctor, had been educated at a finishing school in New York.  She met and married James Bunton, owner of the Bar S Ranch in Sweetwater, Texas.   Shortly after her arrival at the ranch, Mary’s mother sent her a pair of riding breeches and boots so that she could ride astride.  Her appearance caused such a commotion among the cowhands that the cattle stampeded and Mary never wore the breeches again.  In 1886, James decided to take some of his cattle to Kansas and Mary joined him on the trip.  Although she never went up the trail again, Mary continued to help in the round ups on their ranch.  In 1927, the Trail Drivers Association inducted Mary as an honorary member.

In 1939, Mary published her memoir about her trip up the Chisholm Trail.  In the book, she detailed the adventures of the journey, including episodes with storms, rattlesnakes, Indians and skunks.   In her book, Mary recalled a storm so fierce that all of the cowboys removed their spurs in order to prevent being struck by lightning.  They were only able to stop the cattle from stampeding by singing to them between claps of thunder.

“She was not only a gallant frontier Texas woman in the cattle trade but also a pioneer among women in the field of finance- a character so colorful and varied that she has become almost a legend.” – Lizzie Johnson’s niece-in-law, Emily Jones Shelton, 1947 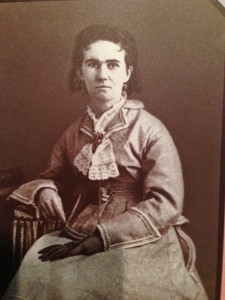 Elizabeth “Lizzie” Johnson managed every aspect of the cattle business and in the process made a fortune.  While working as a teacher, Lizzie did bookkeeping for local cattlemen on the side as well as  wrote stories for magazines .  Lizzie used the money she earned to purchase land and hired cowboys to brand wild cattle with her own “CY” brand. Lizzie became a very successful rancher in nearby Hays County and did not marry Hezekiah Williams until she was 39 years old. Lizzie and Hezekiah went up the Chisholm Trail at least three different times.  Although they traveled together, they kept their herds and profits separate.   Before she married Hezekiah Williams, Lizzie had him sign a contract that stated that her property and any financial gains would belong to her.  Lizzie often bailed Hezekiah out of bad business deals with her own money, which he had to repay.

Lizzie Johnson’s father founded a school called the Johnson Institute, which Lizzie and her siblings attended.  After some collegiate study, Lizzie became an instructor at the Johnson Institute. Lizzie’s childhood and adolescence were filled with education and religion.  She was a smart business woman. She also kept up with the latest fashion and paid attention to her appearance. Lizzie would have fit right in with today’s cattle women.

“For what woman, youthful and full of spirit and love of living, needs sympathy because of availing herself of the opportunity of being with her husband while at his chosen work in the great out-of-door world?”  – Amanda Nite Burks, circa 1924 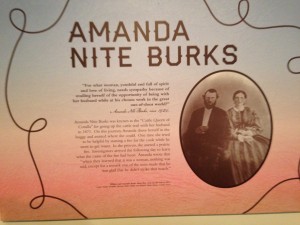 Amanda Nite Burks was known as the “Cattle Queen of Cotulla” for going up the cattle trail with her husband in 1871.  On this journey, Amanda drove herself in a buggy and assisted where she could.  One time she tried to be helpful by starting a fire for the cook while he went to get water.  In the process, she started a prairie fire.  Investigators arrived the following day to learn what the cause of the fire had been.  Amanda wrote  that “when they learned that it was a woman, nothing was said, except for a remark one of the men made that he was glad that he didn’t strike that match.”

“She met isolation and hardships with a cheerful heart and danger with undaunted courage.  With unfailing optimism, she took life’s varied gifts and made her home a house of joy.” – Charles Goodnight, circa 1878

Mary Ann “Molly” Goodnight married rancher Charles Goodnight in 1870.  She undertook numerous duties on the ranch including housekeeping, cleaning, providing medical care for the people of the ranch and giving reading lessons to the families of the ranch hands.  Eventually she handled the business transactions of the ranch. Molly accompanied her husband on two trail drives from the Palo Duro, Texas to Dodge City, Kansas.   She owned her own herd under the  “PATM” brand and co-owned cattle with her brother Walter under the “Flying T” brand. In 1879, Molly Goodnight received a present of two buffalo calves from her husband.  Others soon gave her buffalo as well.  By 1887, Molly’s buffalo herd numbered 250.  The Goodnights played a leading role in saving the Southern Plains Buffalo and the descendants of their herd thrive today at Caprock Canyons State Park.

Women on the Trail 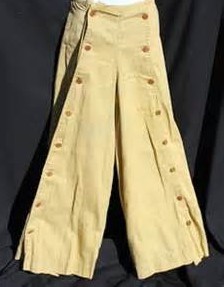 Cattle Queens went on cattle drives and transportation on the trail varied.  Some rode more comfortably in buggies during the trip.  Others rode horseback, which usually meant using a sidesaddle.  Sidesaddles allowed women to have both legs on the same side of the horse and wear a skirt.  When Molly and Charles Goodnight moved from Colorado to the JA Ranch in the Texas Panhandle, John Adair and his wife Cornelia came along with them.  Cornelia rode sidesaddle for the entire journey while Molly alternated between riding side saddle and driving a supply wagon.

Up until the early twentieth century, many considered it improper for a woman to ride astride a horse or to wear pants.  On the frontier, it became obvious that wearing skirts and riding sidesaddle were inconvenient and could even be dangerous.  The need to be able to ride over rough terrain and in many cases work cattle eventually led to the development of the divided riding skirt or “culotte.”  The culotte was a pair of wide legged pants that allowed a woman to ride a horse astride but resembled a skirt when she stood.

It was a most informative exhibit. Hats off to Capitol Visitors Center for recognizing “Texas Women on the Cattle Trails”.  We think that women in the cattle business today – those really running ranches – making the decisions – working the cattle – are unique.  But in fact, we have a legacy of women that faced the same heat – the same dusty cow work – cattle drives – cold, rainy nights. We may not ride side saddle anymore – but we all share the same determination – perseverance – strength – and courage. I told Kyle – I want to be a Cattle Queen!!  We both laughed.