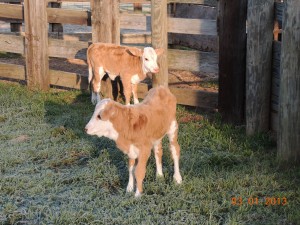 What can I say – every now and then God blesses us twofold!!  And this time it was literally two.  February 26th – we were putting out hay and noticed a cow at the edge of the woods.  We are so near the end of calving season that no one was expecting anything unusual.  Gary went back to check and there she was with two little ones.  Twins are a beautiful sight but often times one does not survive.  The beauty about crossbred cows – they are hearty – tenacious – great mothers.  She had them both up and nursing.  Did I say protective?  Don’t think you are going to get too close – she will put your butt back in the truck if she so much as hears the door squeak. It’s the way they lock their eyes on you – like a missile on a target – head bobbing – front hooves pawing the dirt in the air. She had made it quite obvious that she had everything under control.  So we left for the night. 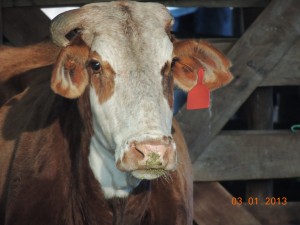 The next morning we went back to check on everyone.  One little one was missing.  Now except for the few crossbred cows – we now run a Brangus operation.  So since everything is black it was pretty easy to spot these white faces.  We found the missing calf asleep under a tree.  I think that is what happens – the weaker calf just lays up – sleeps – gets weaker – and the next thing you know – it is gone.  We picked up the one sleeping and put it in the back of the truck.  No problem getting it – but then it started bawling for momma.  When she got to the truck, the other calf was in tow.  So while I distracted momma (and we are not going to get into how I distracted her – let’s just say I am still faster running around the truck than she is) Nacho loaded the other baby.  Now the cow easily followed us to the pen with both little babies bawling from the back of the truck.

Both momma and babies were trailered home so we could give them all special care – and we needed to be sure both babies were nursing.  All are doing well.  In fact, we turned them into a bigger pen today and the little ones ran and bucked while momma took her usual guarded position.  In a few more days they will all move back to a small pasture.  By the way – it’s two little heifers.  We don’t normally name – but if you have any ideas let us know.  These little ones have won our heart so I don’t think they are going anywhere – ever – if you know what I mean!! 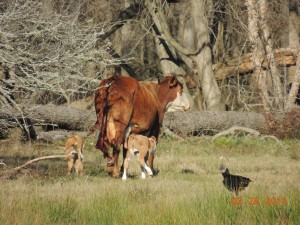