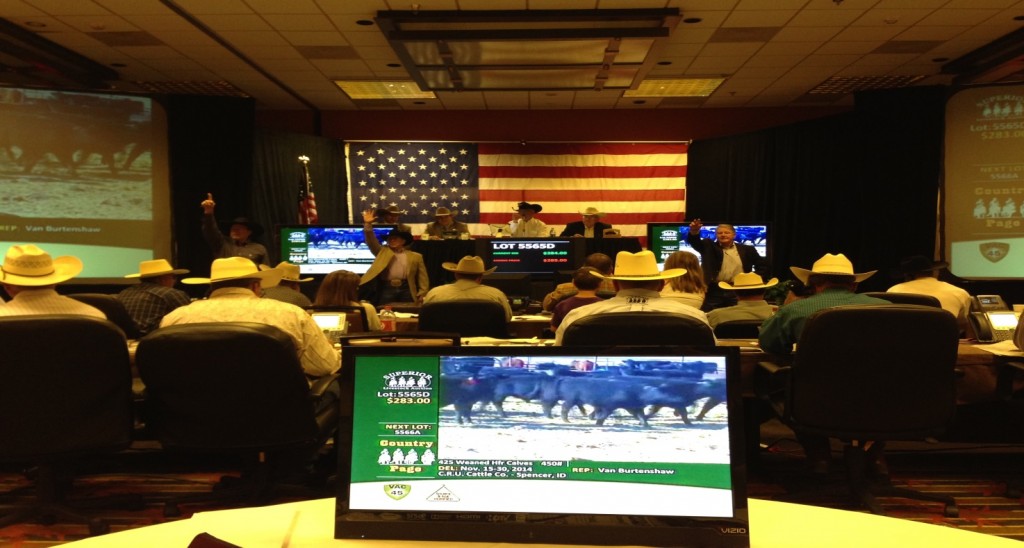 Last year Matt Anderson bought all the 7-7 Ranch calves. So when Matt came to the ranch to look at this year’s production, he suggested we sell our calves on Superior Livestock Auction. Superior is America’s leader in livestock marketing. They claim to bring the market to the producer – and they do!!

In 1987, Superior Livestock Auction introduced satellite video marketing to the nation’s livestock industry and forever changed the way load-lots of cattle are marketed. Because of its commitment to innovation and utilization of the best technology available, Superior has grown to become the largest livestock auction in the United States; marketing well over two million head of cattle annually. With over 380 representatives located throughout the United States, Superior provides a complete national marketing network that serves both buyers and sellers.

Sellers have the opportunity to market cattle to a broader nationwide buyer base, as each lot is filmed in its current domestic location, and uploaded to Superior’s website. Unlike conventional livestock marketing methods, buyers have the opportunity to visually assess and select lots individually, with access to current EPDs, by means of the internet. Load lots of country-fresh cattle are sold on contract for immediate-to-future delivery using the most accurate form of price discovery available and competitive bidding. Superior has created a national livestock market, where prices are exposed without regard to local climate conditions or demand. 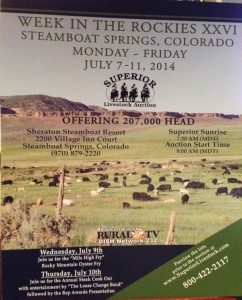 Superior conducts bi-weekly satellite video auctions on Dish Network’s channel 232 and a daily Internet auction listing called Country Page. These options provide an opportunity for both buyers and sellers to take advantage of current market conditions. The success and growth of Superior Livestock Auction is the result of its reputation for honesty and integrity, its qualified and professional staff and representatives, thousands of satisfied customers, its leadership role in industry innovations and its goal to be the best, most complete livestock marketing service in the industry. And so…decision made… our calves were going to run in the “Week in the Rockies Sale” in Steamboat Springs, Colorado – July 7 – 11th. Thus our journey began with much anxiety on my part – lots of laughs – and lunch at the Moose Cafe in Kremmling, Colorado. Matt Anderson (Superior Livestock Representative) – Sally Ann Ellert (my dear friend) – and me off to steamboat Springs for the adventure of a lifetime! 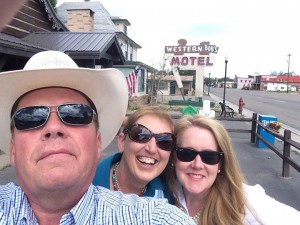 The next day was – SALE DAY!! I was a little anxious to say the least! We work one whole year for one per day and this was it!! Matt Anderson worked hard – calling buyers to tell them about the cattle. He had been to the ranch – knew what the calves looked like – helped me with estimating the weights for shipment – took the video that would run the day of sale – and continued to call buyers. Matt’s biggest job was keeping me calm – a job that required Sally Ann as well. The Superior Catalog had the Texas cattle selling the first day and we would be the 10th, 11th, and 12th lots to sell. Jordens Cattle Co. would sell three truck loads – 2 loads of steers and one load of heifers. Here is the actual video of the cattle selling. 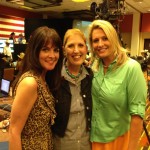 One sale lasted only 45 seconds, so in approximately 3 minutes all our calves had sold. The cattle market is definitely up this year, but Superior Livestock Auction got the ranch more $ per pound than I had calculated. I was very pleased!! But there was more to Superior – we were truly embraced by everyone – welcomed to the “family”. There was Jill Roark (Auction Coordinator) and Nancy Gill (Marketing Director). There was Mr. Jim Odle (one of the founders of Superior) and Mike Bollinger (one of the ring men). 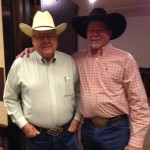 Mike is the guy that stands in the front of the auctioneer yelling when he has a bid – the auctioneer raises the bid – the ring men continue to identify the buyers with the last and highest bid . They work hard to keep the bid moving up.

After the cattle sold, we were invited to talk about programs that would make our calves even more valuable in the future – vaccinations, genetics, animal welfare, all natural, source and age verification and non-hormone. It was more than just a sale – it was an educational experience. It was all amazing – the best part was the calves sold for the highest price ever!! I believe Superior has earned their name – they truly are Superior!

If you have questions, please go to www.SuperiorLivestock.com or email info@superiorlivestock.com