If there isn’t a Cow Hall of Fame – there should be.  The story I am about to share with you is truly remarkable.  We have all heard the nursery rhyme about the old woman with more children than she knew what to do.  Well – I have the cow that has so many “children” – but believe me when I tell you – she knows exactly what to do!!

We start calving December 1st.  This past December was one of the coldest on record and the cold – the frost – the ice – all started early.  In fact, we had freezing rain for several days on December 1st.  My Dad used to say –

Calves born into that condition may not survive.  Momma has to work extra hard to deliver – get the calf cleaned up – get the calf to suck for nourishment and warmth – all in a very short time frame.  So needless to say – I was praying hard during those freezing cold sleet filled nights.  We were being especially diligent and observant. It was on the first day of calving that we started to observe Cow 333.

Now we are in our pastures day and night during calving season.  All the cows are palpated (preg tested) so we have a reasonably good idea about when each cow is supposed to calve.  So we observe and monitor each cow’s progress – actual calving – health of cow and calf.  It wasn’t hard to find Cow 333 – she was huge.  She was noted to be one of the first to calve – so we watched – and waited – and she got bigger – and we waited – and she got bigger – and we watched her – and she got even bigger.  She was now a couple of weeks past her delivery date.  It is not an exact science – and prenatal care does not include a monthly visit to the vet. 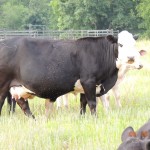 Cow 333 is a commercial Brangus cow.  As you can see – she is what we call a Black Baldy because of her white face – genetically dates back to some Hereford influence.  She is currently about 8 years old – a gentle soul with the best disposition.

She was now looking like (most women will be able to relate) those last few days, hours, seconds when you feel like you just want to be pushed around in a wheel barrow.  BIG AS A COW – in the literal sense!!  Time for a vet visit!!  Now – the herd she lives in is over 100 head – so she had to be sorted off from her other maternity mom friends (they get a little grumpy) – walked to the pens (which she did without complaint or hesitation) – loaded in the trailer and hauled to the vet.  Upon examination – she was diagnosed with a ruptured tendon which would cause her difficulty with her delivery – she would lose her ability to “push”.  Therefore, the vet felt she needed an overnight stay – induce labor – deliver the calf.  The entire visit – she was never fearful – anxious – never tried to kill us or inflict pain (the usual response in these situations).  Calf was delivered – mom and calf healthy and strong – ready to go home!!

“But that is only the beginning of this incredible story.” 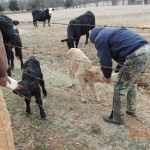 After calving, I had a cow get down in a ravine – she went down in a weird way where she could not get her feet back up under her and we found her dead the next morning.  Calves that lose their mommas are called doggies.  So we had Doggie #1 to bring into the barn to be bottle fed.  Now Cow 333 was there with her newborn.  We bottle fed the doggie that evening but when we went to the barn the next morning Cow 333 was nursing her baby and Doggie #1. 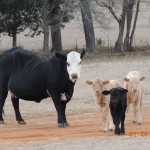 Next was Oliver – born to one of our first calf heifers.  Heifers are sometimes just not ready to be a Mom so on a very cold morning we watched Oliver going from one heifer to the next stealing a little milk from each until he was noticed and kicked aside.  See – that’s the deal – most cows – especially Brahman influenced cows will nurse their own calf only – one calf – their one calf only!!  So we decided if Oliver was going to survive and thrive – he needed to be rescued – Rescue #2.  Got him to the barn – bottle fed him – went to the barn the next morning – Cow 333 had her calf, Rescue #1, and now Rescue #2 (Oliver) nursing – ALL AT ONE TIME!! The cold winter wore on.  We had one calf abandoned with pneumonia #3, one colic (never heard of it in cattle but this little guy was suffering) #4, one calf’s momma was old and stopped giving adequate milk #5, one little guy’s momma went down in her back #6.  All these calves were brought to the barn – Cow 333 took them ALL plus hers – SEVEN CALVES! 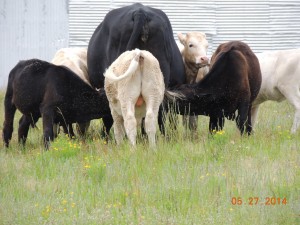 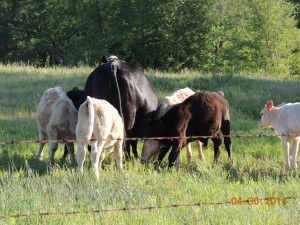 The barn is in a small pasture.  Cow 333 was given extra hay and grain!!  Actually – she was given whatever she wanted!!!  It has been amazing to 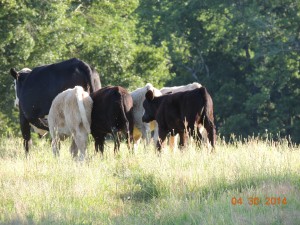 watch.  4 calves would be nursing – 3 in line waiting their turn(above right photo).  If one calf went off – she would call it back.  They move around the pasture in one little herd.  In fact, the other day we were working cattle – 5 of the calves got through the fence and went with the herd.  I was thinking about how we were ever going to get them all separated and back.  No need to worry – cow 333 ran to the fence and called her brood back.  I just opened the gate and she stood bellowing to them to return immediately and they did just that!!

Cow 333 has raised 7 calves this year.  It is the most incredible ranch story ever!!  One calf was sold a few weeks ago.  She now has 6.  She is in great health and body condition.  We did not breed her back because we do not want her injured in a pregnancy that she will not be able to see all the way through again.

Here is the dilemma.  When the calves are all gone – she will stop giving milk.  Not being bred back – she will not re-produce milk.  BUT – I am thinking – maybe there is a rancher out there that has some babies that need a good momma.  I would sell her at market price.  So pass this on to all your rancher friends and tell them to pass it on.  Let me know if anyone is interested in a momma to raise all your orphans, strays, abandoned babies!!  Just a thought!!  Cow 333 is most unusual – rare – loving and kind!!  She really deserves “Momma of the Year”.  She has already won the award here – and our hearts in the process!!! 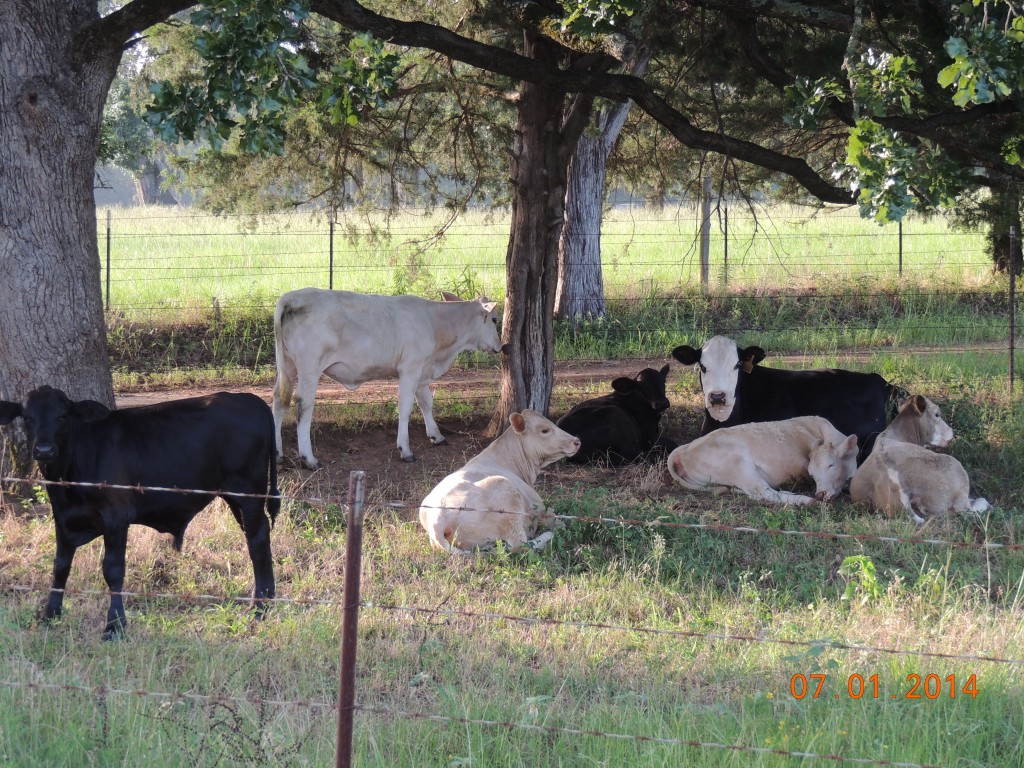