In ranching there is no down time, no holiday breaks, no weekends off. It’s a 24 hour-a-day, seven day-a-week, 365 day-a-year job. The days are long and hard, especially with unpredictable Texas weather and extreme summer heat. It’s not just rounding up cattle, cutting hay, feeding livestock and fixing fence.
There is an endless amount of work that is not only physical labor; it requires math, science and the use of today’s technologies. Ranching is about knowing books, accounting, land value, the day-to-day prices of cattle, feed and fuel.
In ranching, especially on a legacy ranch, you stand to lose a life’s work with every high-rolling decision you make, so it pays to know all of the inner workings of your operation from top to bottom.
While women in today’s society have taken over the boardrooms of multi-million dollar business, the ranching industry is still very much man’s world. However in Anderson County one woman running a 2,500-acre cow/calf operation is proving that women can also take the bull by the horns. 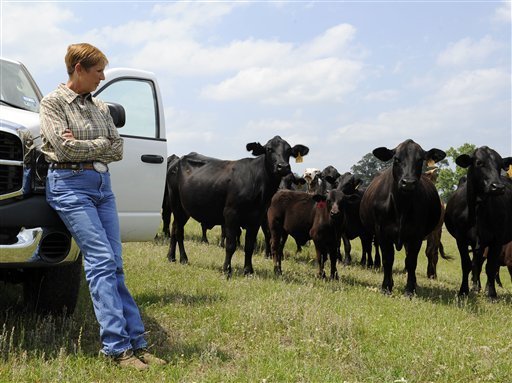 Before taking over her father’s ranch, Linda Jordens Galayda worked in New York for over 25 years making her way to the top of the fashion industry as the vice president of Foley’s (todays Macy’s) working with the likes of Ralph Lauren, Gloria Vanderbilt, Diane von Furstenberg, Carl Lagerfeld, etc.
On the weekends however, she was a world away working cattle on her father’s ranch the Seven Bar Seven Ranch, just outside of Slocum. Today, Galayda owns and operates this ranch, a legacy that she hopes to one day pass on to her own children.
“My father always discounted my career,” Galayda said. “I’d tell him about the things I was doing and the interesting celebrities I had met and he would say, “I don’t care if you had lunch with Gloria Vanderbilt, we’ve got cows to work.
“I was always involved in someway.”
As her father’s health began to decline, Galayda began to take on more and more responsibilities on the ranch and spent less time in New York, eventually taking over the complete operation. 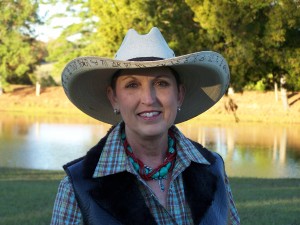 A suave businesswoman, Galayda has always tried stay ahead of the game, like trying to purchase hay when prices are reasonable, sometimes storing hay longer than she would like, but making sure to test that hay and adjust supplements as necessary. She also keeps track of the prices of supplements to get the best bang for her buck. And now she is trying to corner the market of online and satellite video marketing. According to Galayda, she has been working with Matt Anderson at Superior Livestock Auction. Her calves were recently run in the “Week of the Rockies Sale” in Steamboat Springs, Colorado. During that week, Jordens Cattle Co. sold three truck loads, two loads of steers and one load of heifers. “One sale lasted on 45 seconds, so in approximately three minutes all of our calves had sold,” reported Galayda. She noted, “The cattle market is definitely up this year, but with Superior Livestock Auction, we got more money per pound than I had calculated. I was very pleased.”
According to Galayda, “Superior Livestock Auction is one of the largest livestock auctions in the United States, marketing well over two million head of cattle annually. With over 380 representatives located throughout the United States, they provide a complete national marketing network that serves both buyer and seller.”
She noted, “Through this program, livestock are sold on contract for immediate-to-future delivery using the most accurate form of price discovery available and competitive bidding.
“And we don’t have to haul cattle anywhere. They send a truck and pick them up and give me a check. It’s better on the owner and the cattle. If I don’t like the prices I have the opportunity to PO the sale. Of course, I’ll have to pay a little penalty for that.”
Another way that Galayda is trying to corner the beef industry is by making her operation “all natural” with “grass fed cattle” and “no steroids.”
“While steroids help to beef up cattle and make them more hearty, the consumer is wanting steroid free beef,” Galayda said. “So, theoretically, it could cost us some in pounds. However, the consumer will be happier.”
Of the changes in her legacy operation, Galayda said, “My father was pretty progressive. He knew about the video auction program and he tried to stay in tune with the consumer and make changes when the consumer began to change.” 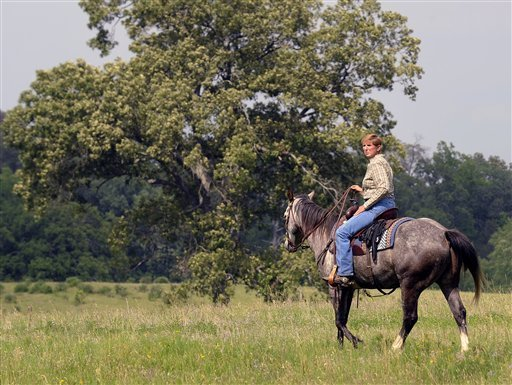 While there are some men that may try to discount Galayda because she is a woman, they quickly realize the mistake that they have made. Tough as nails, she knows her operation inside and out and knows the cost of production and the areas where she can and cannot make adjustments. She is not the “little wife” cooking, cleaning, only doing the accounting and never really getting her hands dirty. She is the operations manager and is in complete control of her ranch. There is a routine and schedule for every part of Galayda’s cow/calf operation. She is constantly studying the markets. She knows prices for hay, feed and nutrients as well as the going price of cattle and can quickly do the math to recognize where the profit margin lies. Before the sun is up, Galayda has already started her day and will work into the night. She keeps records on every one of her cows and knows each one as a mother knows her children. She talks to them and nurtures them, building them up to produce some of the best breed stock in the state. Galayda, and her husband Gary work the ranch on a day-to-day basis, they also have local cowboys that help with working their cattle including Brandon Richburg and Carl Murphy. “I’m out there working alongside them. Out working cows with my father, I was never given any special treatment. I was expected to saddle up and ride and take care of myself like everyone else. You have to study everything, all the time and know that there is a constant change in variables. No day is ever going to be the same.”
Galayda has also found her voice as a rancher in her blog “Texas Rancher Girl.” Through this blog, Galadya shares her experiences in ranching, celebrates historical figures and educates others on polictics effecting the ranching industry.