It does not matter where our travels take us – whether it’s a vacation or a business trip – foreign or domestic – we meet new people, taste new foods, hear different accents or languages, see beautiful landscapes or often dwellings of a life different from what most Americans enjoy – we experience a new culture. 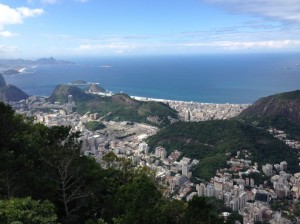 We had now been in Brazil for 5 days – so much to see and experience in such a short period of time.  Exactly what was everyone thinking?  What was their most memorable thought up to this point.  We decided to ask and these were the answers.

Jeremy – how conservative they were with water and how ineffective we were.  Linda noted the conservation of electricity and water in the hotel rooms.  The hotel key had to be placed into a slot to turn on the electricity and removed when you left so everything was cut off.    Brady too commented on their efficiencies – everything small – small hotel rooms – small cars – small cab over trucks.  At this point someone shouted small beers but wanted to remain nameless!!  Kelly – “high cotton”.  As you can see from the photo – they really were in “high cotton”. 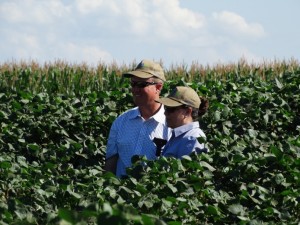 Brian – vastness!!  Casey – really big ag!!  Chase – Brazil is an amazing country.   Brandon – massive farming!! (He should have talked about the Brazilian coast guard helicopter rescue in Rio – but hey, that’s another story – and he likes his version of the story better than mine!!)  Matt too pointed out that there really were not words to describe the size and scope of these farming operations.  Kelley too commented on the terrain – the vastness of the fields.  But then she smiled and added – that Rio is one sexy city!!  Shelly – everything is tall and green!!  Eric talked about the utilization of the land – 2nd crops – land is constantly in production.  Debra thought they had made tremendous technological advances in their farming equipment.  Mary Jane said “the vastness” but then very thoughtfully added that one day these vast cotton fields could be the competition of our great Texas cotton farmers.  All the farms – cotton, sugar cane, corn, cattle – are vast and growing.  Brazil’s production is already massive – and yet untapped!!  Her reservations are serious – Brazil will easily be a competitive force in the future.  Sally too spoke of the vastness and the competition that lay ahead. 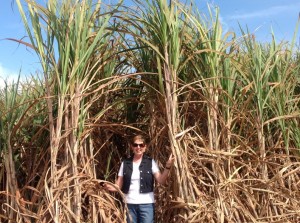 Mark talked about the food – the buffet was our “fare” everyday – with all the beef, chicken, pork you could eat.  We all wondered if that was the way the average Brazilian ate every day.  We had been told that with the rise of the middle class – beef was more in demand than ever. Kevin really did not like their “grass fed beef”.  He was ready for a good ole’ Texas steak on his plate – not beef sliced off a skewer at the table on to his plate. 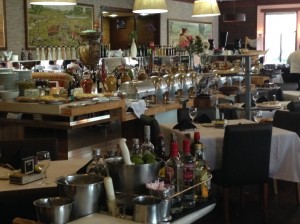 Jason – “no straight answers”.  He was right.  We often asked questions and the answers were vague or completely missed the mark.  It was hard to tell if it was just the translation or by design. John – “stuck in the elevator”.  Yes, that’s right!!  Upon our arrival at the Hotel Intercity in Cuiaba – after a long day of farm visits and travel – tired and hungry – several got stuck in the elevator for about 20 minutes.  Remember those “small” comments – that most definitely included the elevators.  Now here were several Americans with all their bags stuck in a tiny elevator!! 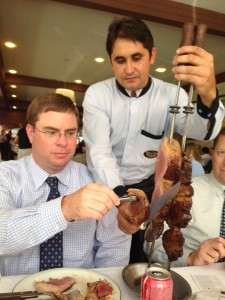 I would call that a memorable event!!  Heath thought the weather was incredible!!  Joe marveled at the ag boom towns.  Large towns had sprung up near the vast farming areas.  Some towns are only 20 years old.  Jesse has travelled to Brazil many times but each time he says he is taken with the beauty of Brazil.  Lindsay did not feel the people were as warm and engaging as she had expected.  Wade had similar thoughts – that the people were not approachable – did not seek us out to try and visit.

Dr. Jim has not been back to Brazil for eight years.  In that time period, Brazil has increased their acreage, doubled their production, established and increased storage capacity, added miles of highways to move their production, and added the latest technology in farming equipment.  Food is their game!!  “Food” for thought – how much growth will take place in the next 8 years – and the next?

At the end of the day our bus stopped at a roadside park about half an hour’s drive northwest of Primavera do Leste. 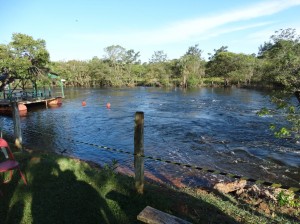 It was a beautiful setting along the Rio das Mortes (River of Death).  It was much like what you would expect to be built by a bunch of talented rednecks with some time and extra materials on hand.  We enjoyed some refreshments from the on-site concession and listened to the flowing river.  Several contemplated a spin down the zip line, while others found a game of crazy dice.  At one point, a classmate even decided he needed a dip in the river and took the plunge.  It was a great setting to relax for just a bit.  From there we traveled back to the hotel and walked downtown for more protein and starches for supper. 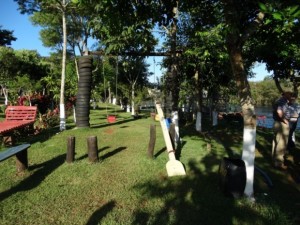 Not one memorable thought was the same – except maybe the vastness of the farms.  I have to tell you – after seeing miles and miles and miles of corn, cotton, sugar cane – Brazil will be a player in the business of feeding the world.  The only thing holding them back at this moment is their infrastructure – not having the highways – means to get their products to the ports for export – but know that they are aware of their issues and working on those problems.

For us – it was another moment of opening our minds to our challenges but only to intercept that thought and convert it to opportunity.  All those in American ag are resilient – dedicated to producing the best product – willing to learn new techniques but always committed to excellence.  There is an inscription at our US Capitol – “When tillage begins – other arts follow.  The farmers therefore, are the founders of human civilization.”  Just something to think about!! 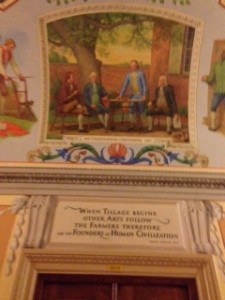