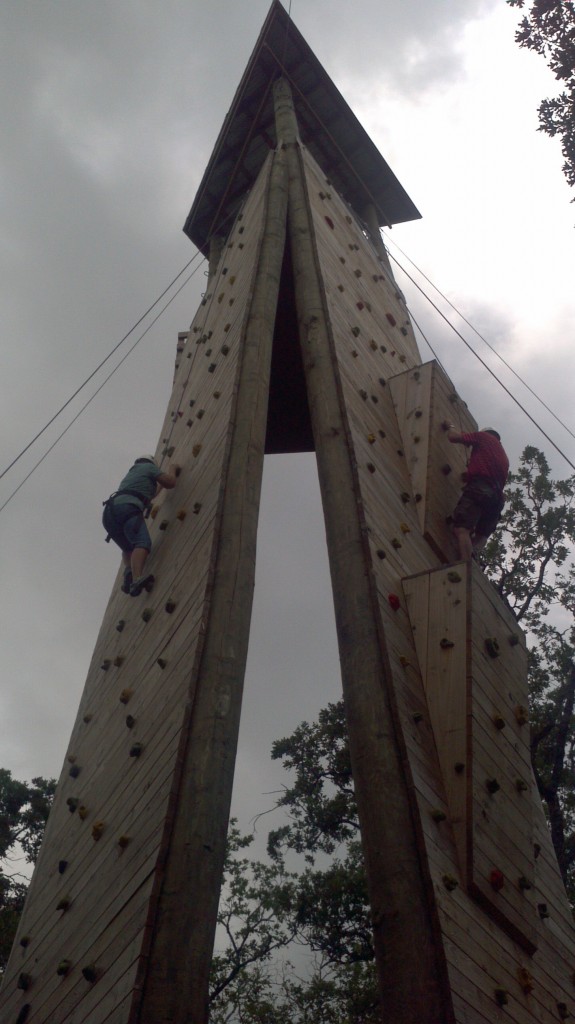 Absolutely incredible!!!  They claim to be an “action” learning experience – and that they are!!!  The Challenge Course is set in a wooded area primed for physical, mental and emotional games.  We learned to work as a team to solve problems – to communicate with each other for answers and respect each other for their ideas – to trust one another – to think outside the box for creative answers to our problems.  We learned that our team was there for our support and guidance – to watch our back (literally as we scaled the 40ft. climbing wall).  There was always encouragement – and fun as we got to know more about each other.  My new classmates come from varied backgrounds and businesses, but the more I know about my new friends – the more I am in awe of each and every one.  Diversified – yes……..but divided – no.    We learned to speak in one voice – now there’s a take-away lesson.

Rain was moving in again so the fire training field was being cleared. It was disappointing, but understandable that we were not allowed to see Disaster City where most of the world’s fire fighters are trained and certified because of the impending rain storm and lightening.  The field hosts 23 mock fire incidents – a burning plane, a chemical plant fire, a burning building, and a recently added over-turned tractor farm related incident.   This particular week they were hosting the Bomberos – firefighters from Mexico and other parts of South America.  All firefighters and emergency personnel represent the perfect example of a servant’s heart and team work.  These people give every day unconditionally without regard to borders, politics, race, gender, or religions.  This is the epitome of commitment – they always answer the call.

This is the moment when you realize what an awesome opportunity has been laid out before you – the prominence of the sponsors – the accomplishments of the guests and returning alumnus.  We were welcomed and embraced.  We were able to talk to and most of all – listen to the world’s brightest and most successful.

Dr. Jim presided.  He welcomed – introduced special guests and sponsors.  Dr. Mark Hussey, Vice Chancellor and Dean, College of Agriculture and Life Sciences spoke of his support for the TALL program.  He spoke briefly about the work – value – and the vision of the program.  Dr. Brett Girior, Vice Chancellor for Strategic Initiatives was our keynote speaker.  He had just returned from Washington where he had secured one of the largest grants ever acquired for Texas A&M.  Dr. Girior was a pediatrician who has now extended his expertise beyond the private sector to industry, government, and other academic institutions.  He is responsible for leading efforts in the research and development of biotechnology initiatives.

Each member of the new TALL XIII class introduced themselves.  We were then assigned a sponsor that treated us to dinner and the pleasure of their company.  Jesse Womack and I had the honor and privilege of dining with Capital Farm Credit – Mr. Pat Shields, Vice President Relationship Manager and Mr. Jim Phillips, Director Special Assets.  It was such an enjoyable evening.

We met in the lobby for our final day.  Dr. Jim prepared us for our caravan to the George Bush Presidential Library.  Since I had driven the day before with my roommate Sallie and had gotten us lost (which is so typical of me) – Dr. Jim rode with me so I would not get lost again!!  What an opportunity to hear many more of the incredible experiences, awards, and recognitions of this great man.  There will be so much to learn from him over the next two years.  The amazing part is the humility – the servant’s heart – the willingness to teach – the strength of character – the integrity of leadership.  His openness is an invitation to greater learning and I for one am here to listen and learn.

By the year 2050 we will have half as much oil as we do today and the world population will be around 9 billion.   One certainty – the price of oil is going up.  At this moment most of the world’s production is coming from Saudi Arabia, Venezuela, Nicaragua, and Iraq – also four of the greatest trouble spots.  Our brightest development in the US has been the Eagle Ford.  The oil production has brought a new ag opportunity – Guar is a drought-resistant legume that was mostly being produced in Pakistan and India and is now being used in fracking.  Guar prefers a hot, dry climate like that of west Texas so they are being asked to produce it.

Of course, the worries abound in energy production – world competition – limits on drilling – no consistency in our energy policy – environmental restrictions.  All the renewable energy sources have their challenges – wind can’t be stored and the transmission lines are not in place.  Sustainability is the key issue – socially economically, and environmentally.

Texas is a great place to replicate production conditions for almost any part of the world because of our varied climates and terrain.

Agriculture will continue to play a major role in the energy production today and in the future.  Even with today’s initiatives, the road to alternatives is arduous.  It is imperative that leaders step forward and that we all pull together to form consistent policy to insure a secure future.

I have had the opportunity to work with the TVMDL before.  We had an issue with several cows dying at one time in one pasture.  My Dad had had a lengthy illness and our attention had been on him and his care.  Dr. Steve Wikse came to the ranch – performed a necropsy – tissue and blood were sent to TVMDL.  The results were simply low magnesium.  The lesson was invaluable.  Know the problem and administer the appropriate solution.  In this case – high mag mineral.

Now that is how most ranchers think of the TVMDL.  But their role for today’s society is much greater.  Their diagnostic capabilities are not only invaluable to our day to day animal health, but now they are vital to work with Homeland Security and an attack against our food and water supply.

By Day 4, we have had a preponderance of information from some of the greatest speakers and business executives.  You might think that by this moment we were on over-load and not able to process any more data.  Well think again – Dr. Cerami could have talked for hours and we would still be on the edge of our chairs.

He spoke of our national security pre and post 9/11 – world views – geo-politics with concern over the flash points in the Middle East – and the international agreement that the US should lead.  Yes – he even mentioned that Congress needs to be engaged for any program to work.  Organization does matter.  He did draw parallels to Dr. Dave McIntyre when he spoke of world views.  The realist who believes that we have our own interest.  The Idealist who believes we value international community and we will work well with others.  The pragmatist who rides the fence between the realist and idealist.  Then, of course, there is the constructivist who believes public opinion has to represent the international and that we are no longer sovereign.

He challenged us to think about when a leader is dangerous?  Nations have character.  He defined leadership under these terms:

(3) Collaboration with other nations – people and money.  And in this aspect we are behind in international law.

As guardians of our families and our businesses, we are no longer engaged only in local commodities.  Who we are – what we do – how we act (or choose not to act) – decisions – choices – can have global impact.

Mr. Douglas Campbell – “Behind the Scenes” – Tour of the George Bush Presidential Archives 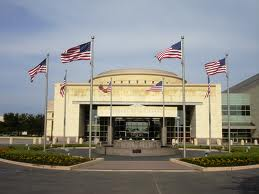 Unbelievable!!!  One can’t possibly imagine the files from a Presidency – but then to see the enormity of it all – mind boggling!!!  I also appreciated the commentary on the work of the archivist.  How each document has holder equity and must be released by that holder before the public or media can have access.  What a privilege to have a glimpse behind the scenes.

Dr. Jim closed the session and released us.  There was no rushing away.  It took a few minutes to gather ourselves knowing that we had just been given a gift when selected for this program.  I felt like we had been allowed into the inner sanctum of the elite.

In Nelson Mandela’s inaugural speech of 1994 he said “You are a child of God.  Your playing small doesn’t serve the world”.  I left my first session of TALL energized to make a difference – to be a leader – to be an advocate and a voice for the agricultural industry that I am so passionate about.