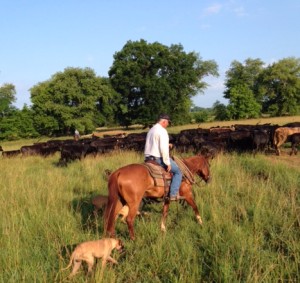 “My heroes have always been cowboys” – of that much Willie Nelson and I agree. I have spent my whole life working with cowboys and from experience – I can tell you that you will not find a tougher more honest breed – fiercely independent – but forever loyal. Impossible is not in their vocabulary – there is no job they can’t do – they are going to do what has to be done – they always finish what they start – and yes….they do get the job done and done right!! Don’t talk weather to them – it can be 110 degrees or 17 degrees – it can be raining and the creek rising or drought with air so heavy it’s hard to breathe – there can be snow on the ground or fire sweeping across the plains….if cows need to be moved, rescued, doctored, assisted, saved – they will be there with their “spurs on”. There are “moments” – when things don’t go as planned – “wrecks” is a term we use for those pesky little events. But it matters not – the good, the bad, the ugly – our cowboys are there to handle EVERY situation. They are strong in strength and character – courageous without fear. The hours are long – truly from sun-up until the sun sets – and then all into the night and early morning hours. 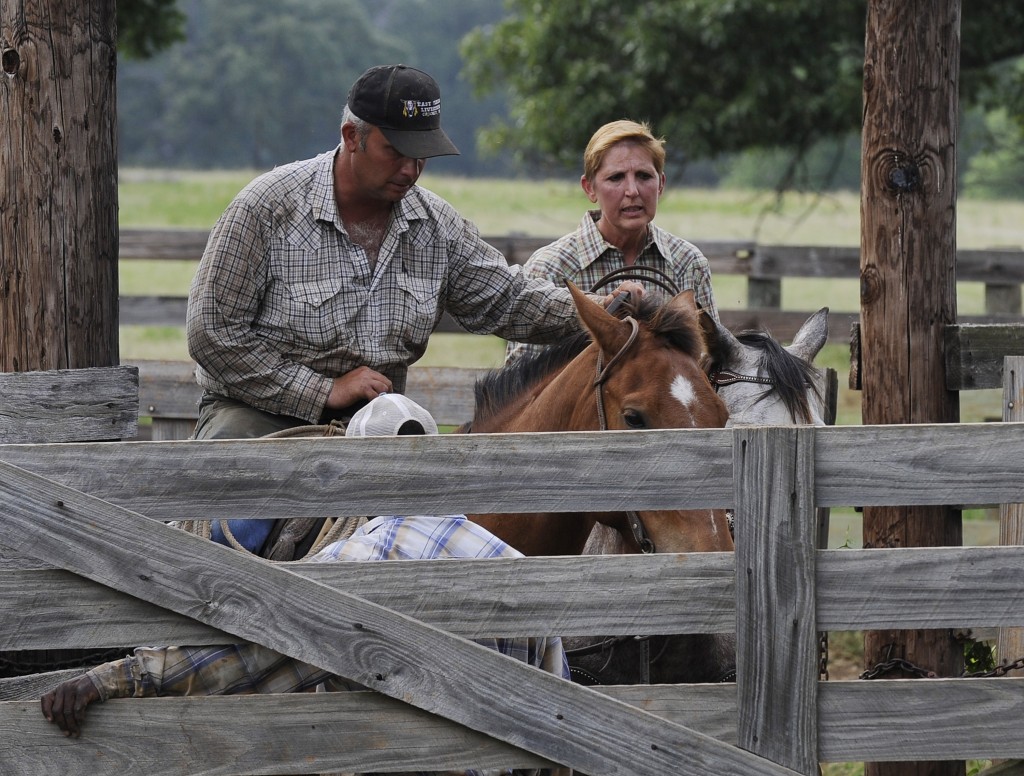 Brandon Richburg is the cowboy that works with us at the ranch – truly the one who works our cattle. He has been with me to doctor cows by the headlights of our trucks – deliver calves in the early morning hours – help a cow in distress when everyone else was sitting down for Thanksgiving dinner. Riding for the brand is not some cute saying to him – when he is working with you on your ranch, he is riding with you – for you – beside you through the best or most difficult of times. 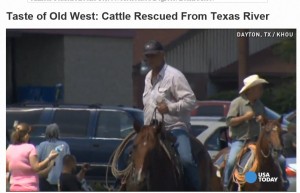 So it did not surprise me that Brandon Richburg set out to rescue several hundred head of cattle out of the flooded areas of Dayton, Texas. As Texas received record rainfall in a matter of days – dams were opened – rivers were out of their banks for miles – and the Dayton area was under water. Cows were stranded on small patches of ground completely surrounded by water – some cows scattered into areas they thought were safe without knowing the water was rising and on its way to meet them. And the worst part was that these were “momma” cows with babies by their side. Brandon, Clint Parker, and Caleb Rhone were the only three to go in to get all these cows from the worst of places although the news media showed a force of people waiting for them as they got the cattle close to the shore. They were on foot at times – searching for cows. They were on their horses riding and then swimming these animals through over 15 ft of water at times. They had to make hard decisions – life and death decisions. But they were never afraid for their safety – just the lives of the cows, calves, horses, dogs. They saw things that they would like to forget – wildlife that did not have a chance – too many snakes!!

Cows don’t drive well in water.  They lose their way.  They can’t see a destination and they panic.  As Brandon was getting one herd near the shore, he said they started swirling in a huge circle – like they were being bayed up by dogs.  They were literally pushing the cows and calves in the center under water.  That situation is extremely dangerous for the riders – like trying to rescue a swimmer that is determined to take you down with him.  Brandon has great dogs – black mouth cur.  These dogs move on Brandon’s command.  Even in water. Here at the ranch,  I have witnessed bulls go off in ponds – the dog jumps in – barks and swims until he moves the bull out of the pond back to shore.  So these cowboys, horses, and dogs had their hands full trying to swim these cattle out of these areas – break the swirling – get them to dry ground and out of harm’s way. 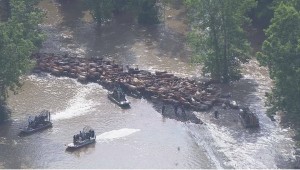 After bringing the cows across the worst of places – snake infested bogs – thickets – high waters – they were met by air boats and other riders. Baby calves that had gotten too tired to go any further were put in the boats.  Some cows that were confused were roped and pulled to safety.  And the closer Brandon brought the cattle to dry ground – he was met by more and more people that wanted to assist or those that were there to cheer them on.  The cattle were driven through downtown Dayton.  Brandon said it was like a parade with all the people cheering – news media – cameras and phones to video and capture the moment.  Of course, he told the media – “I was just doing my job”.

Brandon is unassuming – always calm and confident – in control – even a funny story now and then while you are working to keep the anxiety down. ( I know – I am the one at high anxiety when we work). Brandon Richburg is the real deal – an authentic and true cowboy. It’s not romantic – it’s hard work – dangerous – sweaty – dirty – bloody – gritty – hard work!! And we are proud of Brandon and the work he does.

Cowboys are men of integrity where their word is truth and a bond not to be broken. Now before we get too misty eyed about these guys – don’t cross them – they will stand up for what they believe – they take God and country to heart – don’t speak ill of their friends – and God help you if you hurt their families (and that includes their horses and dogs). I know – I’ve gone a few rounds with Brandon’s dogs!!

So we are really proud of the work Brandon did in Dayton – that he got some well-deserved recognition. Thank God they are all home safe and sound – that they are back at the ranch to ride another day – to laugh and share a few more stories.