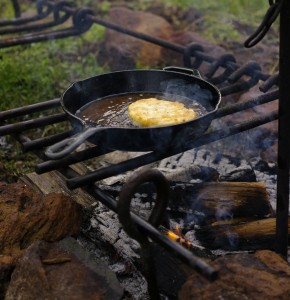 By the end of 1864, some eight thousand Navajo were under military control within the “new” reservation at Bosque Redondo near Ft. Sumner, New Mexico.  The Navajo had learned to use the US government supplies of sugar, flour, salt, lard, powdered milk, and baking powder to make fry bread. During four years of crowded conditions and sparse supplies at Bosque Redondo, Navajo fry bread could be seen puffed up over the camp fires.

After 148 years, this simple bread is a magnificent addition to any meal.  It can be served with the main course as a bread or as a dessert with fresh fruits and cream.  It can also be served at breakfast with honey and cinnamon.   The Navajo fry bread can be used in so many different ways – let your imagination be your guide. 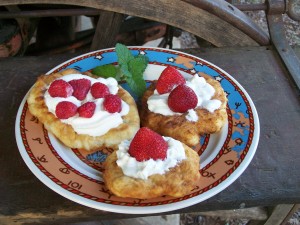